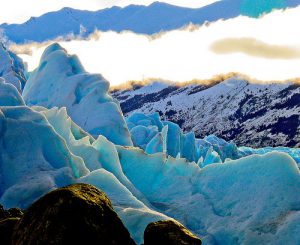 Reporters of climate change have recently been doing new studies on permafrost melting in the Arctic. They are finding that temperatures with a higher average are causing the melting of permafrost in sub-Arctic and Arctic regions faster than originally believed. There is twice as much carbon and permafrost than in the atmosphere itself. If the permafrost melted, it would cause a lot of problems throughout the region.

Permafrost, also known as tundra, is an area of soil whose temperature remains below freezing two years or more. During photosynthesis, plants normally will capture carbon dioxide found in the air. That carbon dioxide is slowly released back into the atmosphere after the plant dies. Since decomposition rates are low in the Arctic since the area is mostly frozen, the carbon is stored rather than released back into the earth. With a change of temperatures, it is like we are leaving the freezer door open causing the tundra to release more carbon dioxide into the air.

If the temperature rises a mere 1°C globally, 25% of the permafrost around the world will melt. This will release a massive amount of carbon dioxide into our atmosphere. This, in turn, will cause more warming, thus causing more melting of the permafrost and more gas emissions. It becomes quite a disastrous loop. In fact, it is estimated that the permafrost gasses today, if released, would be able to raise the global temperatures 1.5°C with no other changes contributing.

It is important that we promote climate change agreements rather than undermine them. If the permafrost melts, the earth will no longer be able to support human life the way it needs to. This is why the Paris climate change agreement is so important. It could potentially save 800,000 mi.² of permafrost if it goes through. Without this agreement, around one-half of the Arctic permafrost could potentially melt and calls disastrous consequences. We need to stand behind this initiative instead of trying to undermine it in the United States so that we can keep our temperatures where they need to be and reduce the amount of carbon be in omitted from permafrost melting.